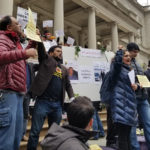 Doug Schifter was a black car driver in New York City for over 40 years Photo by: Avery Miles 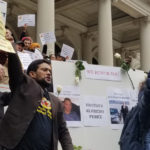 Avery Miles, Willa Rubin, Graciano Clause, Max Zahn, Reece Williams and Kevin Wheeler cover what role suicides can have in sparking a social movement, where cabbies seek refuge during their shifts and what two driver unions think about each other.

Our Brother Doug by Avery Miles

On February 5th, black car driver Doug Schifter shot himself outside of City Hall. With his public sacrifice, Schifter wrote in a Facebook post that he wanted to bring attention to the plight of the drivers.

But when you take your life to fight an injustice, will those in power listen to your message?

Four taxi drivers in New York City recently committed suicide. Their notes, and their loved ones, point to problems in the industry that have left drivers reeling. Willa Rubin has more on what went wrong.

Ride-along: A conversation on the taxi industry by Reece T. Williams

Taxi drivers must display a medallion that grants them what were once exclusive rights to charging for rides in the city. The medallions, which can cost upwards of $150,000, are commonly leased by drivers, but ride share apps like Uber have complicated the business, as those drivers do not need medallions.

Here, Suhel Miah, a 29-year-old Yellow Cab NYC Taxi driver from Queens,  speaks about his decision to return to driving Yellow Cabs, and his thoughts on the state cab industry.

When Time is Money, Cabbies Find Food However They Can by Kevin Wheeler

Cab drivers drive long shifts and pay to use their vehicle. This makes finding time to get something to eat–or to even use the bathroom–pretty tough. Different cabbies find different answers to these problems, but many are lining up everyday at Haandi, a Pakistani restaurant on Lexington and 28th. They go there for the food, the bathroom, and the one hour of free parking right outside.

Are Taxi and Uber Drivers Friends or Foes? by Max Zahn

The Independent Drivers Guild is a union of ride-share drivers in New York City. Well, not exactly. It can’t bargain with Uber or Lyft for a better contract or higher wages. What it is, though, is fascinating—and controversial. Especially when you ask what this group of drivers means for the fate of their counterparts, yellow cab drivers. Is it a rivalry or a potential partnership?